A new kind of aurora 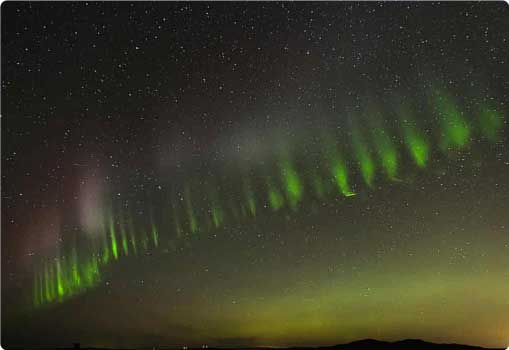 Finnish amateur astronomers have discovered a new kind of auroras that look like layered clouds or sand dunes. According to TASS, referring to the press service of the University of Helsinki, this phenomenon is supposedly associated with high-altitude atmospheric waves.

“The differences in brightness between the “waves” of these celestial dunes may be due to the existence of similar oscillations in the flows of particles falling to Earth from space, or in the distribution of oxygen atoms in the planet’s atmosphere. We assume that the latter theory is closer to the truth,” said Professor of Helsinki University Minna Palmrot.

According to Rossiiskaya Gazeta, this phenomenon, which at the moment has been recorded only seven times, has been observed simultaneously in Finland and Sweden. Photographs of the unusual radiance were taken as part of the cooperation of the University of Helsinki with a group of Finnish enthusiasts, which included astronomers, photographers, and ordinary fans of observing the sky, summarizes Naked Science.

After receiving the pictures, the scientists realized that they had photos of the same unknown phenomenon, but taken from different points of Finland. It turned out that the so-called “dunes” arise at an altitude of about 100 kilometers in the upper part of the third layer of the atmosphere – the mesosphere.

As Professor Palmrot explains, the green color is formed due to excited oxygen, which is probably due to disturbances in the atmosphere, known as internal gravitational waves: these are the same types of ripples that form when a small stone is thrown into a pond. However, in the atmosphere, waves in large numbers often move vertically upward.

Researchers believe that the formation mechanism of such “dunes” can be an event called the mesospheric channel, due to which each particular wave is filtered and bent, which allows it to move horizontally between two layers in the atmosphere.

It should be noted that a similar phenomenon can occur when the temperature of one layer of the atmosphere is slightly higher than both layers above and below it, the authors of the study add.